Amalie Skriver is an award-winning singer-songwriter from Copenhagen. As a young Christian musician, she writes about topics that shine a light on life's many questions, as well as a search for purpose in life which is something many of us are familiar with.

With several nominations and awards in international songwriting competitions, Amalie Skriver has gained recognition for her catchy melodies and great arrangements (take a look). In 2018 Amalie was the winner of the Singer/Songwriter Category in the UK Songwriting Contest with her catchy single Nothing to Say from the EP Clever Minds Cannot Spare Our Lives (2019). The song was examined by expert music industry judges who have worked closely with such artists as Sting, Paul McCartney, Elton John, Kylie Minogue, Robbie Williams, Oasis, Britney Spears and many others. Amalie was also a nominee in the International Songwriting Awards 2018 for best Female Singer/Songwriter with Nothing To Say.

Since 2011 Amalie Skriver has been active releasing four EP's and three single releases (see discography below), as well as playing live shows with her band. Amalie has a true desire to connect with people and encourage the audience through the messages in her songs. With a vocal that easily moves into people's hearts, she was also compared several times with singer / songwriters such as Kate Bush, Sarah McLachlan and Tori Amos. On stage she is accompanied by her childhood friend, the cellist and backing singer, Rebecca Cecilia Kousgaard, drummer Mikkel Mouritsen and guitarist Anders Tuxen.

In 2019 Amalie Skriver played a live show with her teenage idol the Danish singer/songwriter, Sara Grabow, who is the daughter of the famous Danish musician, Sebastian. Amalie is also influenced by other singer/songwriters like Elisa, Vanessa Calrton & Alanis Morissette and the music genre is a mixture of pop, folk, country and Christian. Music has always been a great part of her life, and she grew up with music teachers as parents and she began singing when she was only 3 years old. Amalie is now studying musicology at the University of Copenhagen and is an educated Suzuki Violin Teacher.

In 2010 Amalie Skriver's song Free was featured on Acoustika Vol. 23 - a compilation album for upcoming musicians released by the American indie label 272 Records located in Hollywood. In 2011 Amalie released her debut EP Prefer and that same year Amalie was selected twice as the band of the week by the Danish music magazine Bands of Tomorrow. She was also selected to play in Tivoli at plænen at The Bands of Tomorrow Festival 2011. In 2015 Karrierekanonen (DR.dk) recommended her song Prefer: “Amalie Skriver har fanget os med nummeret ’Prefer’, der med en folket og melankolsk lyd binder en perfekt sløjfe på ugen.” 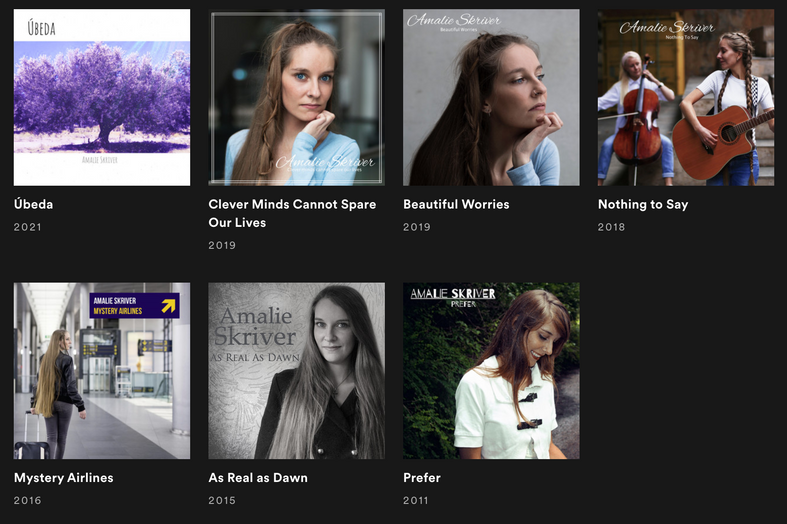